PROF. JOHN COLLINS at the University of Ghana-Legon, April 2013 | photo by Aigerim Saparova

Growing up in England, Dr. John Collins felt like a black sheep. The other sheep were tightly packed with screws, bolts and a craving for the materialistic. To him, they’d been unknowingly brainwashed amidst a western hierarchical class system.

Back and forth between England and Ghana beginning in 1952, Collins permanently migrated to Ghana to study archeology and sociology at the University of Legon in 1969. He notes a sort of mystical presence that he couldn’t find back home in England – a necessary human ingredient he felt was absent from western culture. He calls it “serendipity,” or the daily coincidences that make life more delightful. It’s an intricate thread of moments that open the window to opportunities releasing creative energy and the expectation of positive outcomes.  To Collins, England was an empty hole in comparison.

At this point, music was still a downtime hobby for Collins. Before coming to Ghana, he had dabbled in jazz, blues, and rock, but Ghana amplified his musical passions once he, out of spontaneity and pure luck, joined a guitar band while studying at Legon. Later on, Collins jammed with highlife and Afrobeat bands such as E.T. Mensah, the Black Berets, the Jaguar Jokers, Fela Kuti, Atongo Zimba, Koo Nimo, Victor Uwaifo and Kwaa Mensah, among others. Little did Collins know that he would soon become a major player in the Ghanaian music circuit.

His active role as a participator and observer of Ghanaian music history has allowed him to collect an outstanding archive – and over 100 publications – that reveals how Ghanaian popular music has come to be today.  Unfortunately, the present status of Bokoor African Popular Music Archives Foundation (BAPMAF) is, as Collins puts it, in mothballs due to lack of funding.

In a recent interview with JOHN COLLINS, Professor at the Music Department at the University of Ghana at Legon, we discussed his experiences as a British musician in Ghana, his collaborations with Highlife’s biggest names, and his opinions on the current state of the Ghanaian music industry.

My father was a violin player. My parents were Jazz fanatics. So I was raised on Louis Armstrong, Django Reinhardt and all this. When I was in England, I started to play the guitar and then I joined two jazz bands, a blues band, and later on a rock band. So by the time I got to Ghana in ’69, I had an electric guitar and I could play Jimi Hendrix or The Doors.

There was a competition at Achimota School- I call them pop chains like student groups – and they brought me in as an outsider in one of the groups called Deep Blues Feelings and so we did “Foxy Lady” [by Jimi Hendrix] and I played about two notes and the whole place went into uproar because they have never been able to get Hendrix’s sound because they didn’t have the technology of Hendrix and I had brought it with me. And so we won the competition, but of course it was a bit of a cheat because they brought me in from outside.

My main interest in Ghana originally- I wasn’t really playing the student bands – I started because my father married an Akyem lady, I called her my Aunty Emma. So when I went to meet my stepmother – I always carried the guitar with me in those days – so one of the tenants was the leader of a guitar band concert party. They said, “Well, come with us,” so I did. 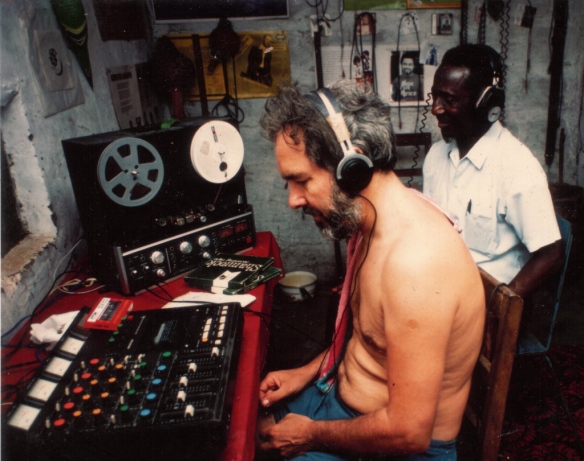 Why’d you make the move to Ghanaian popular music?

When I came to guitar bands – my own first band was a guitar band formed in the mid-70s –the trick with the guitars is that they do what African drums do. You know in African drumming you have the different types of drums but they are all equal. The beats in traditional drumming are very democratically organized. So, they did this with the guitar bands. You don’t really have a lead guitarist, you have a tenor guitarist, an alto guitarist, if I can put it like that. So they play off each other.

There’s a lot of space in African music –there’s a lot of gaps and silences…the main beat, nobody plays it. It’s in the dance steps and in the imagination of the players. There are hidden gaps in the music if I can put it that way. In the beginning, I just really liked the music but later on, I tried to work out why I liked it and I realized I like music with a lot of space in it.

But if you go to a European rock group or orchestra, there’s always the seniority in the conductor, the virtuoso, the superstar. Basically, I am an anarchist politically, and most European music is stratified music…Instinctively, I didn’t like that because I’m an anarchist and that’s what I realized. 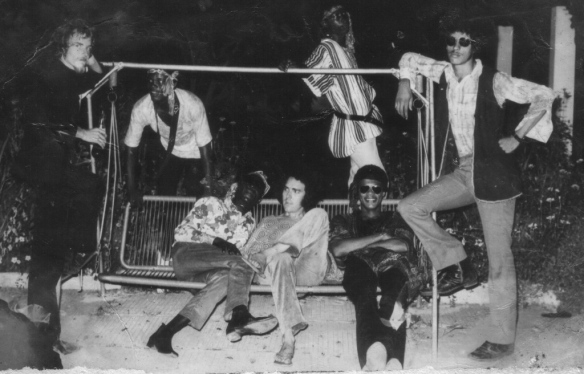 Why didn’t you study music at Legon?

After doing archeology and sociology, I wanted to do an MA in Highlife music in 1972 at Legon. I was forbidden because they said that it was a subject unworthy of academic pursuit and that was my luck because it forced me out of the University. So I was running bands, running a recording studio…but it forced me to learn things that I couldn’t have learned.

So I went out of academia and started writing books and I was a journalist at one point. I got my PhD in Buffalo, NY and then I came back to Ghana. I was brought to Legon at about ’95 specifically to open up African Popular Music Studies. In fact, all the information I give in class – none of it is from books. It’s all people I’ve talked to and got the histories from. 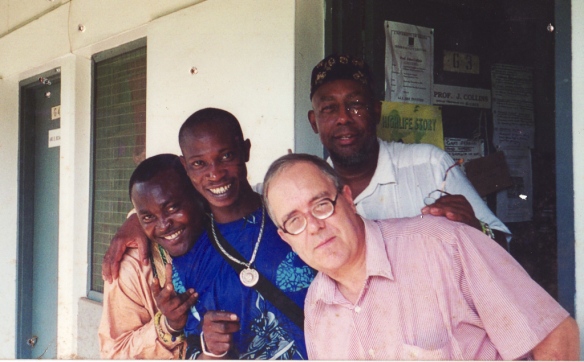 After studying abroad in the States and occasionally visiting Europe, why did you decide to come back and stay in Ghana?

It always keeps you on your toes, there’s always a challenge. No security, you can’t be in a rut. [In Britain] they have a very good trick there of converting you into the victim. And they never stand back and realize that they are preaching a very distorted or limited view of human life. There’s just more space here to be yourself or to do things.

In Europe, it’s like a black hole – any creative energy you push out, it never comes back, it just dissipates and the only people that it really comes back to are the ruling classes because it’s a class system. But here, you come, and you find that things that you do, if it’s positive, it comes back to you in some way.

HereHere document – A here document (also called a here-document, a heredoc, a hereis, a here-string or a here-script) is a way of specifying a string literal in command line shells in… →