New York based Ghanaian actress MaameYaa Boafo was in Accra a couple of months ago during the shooting of the web series, An African City. Mantse Aryeequaye took MaameYaa on a walk through the back roads of Dzorwulu, a suburb of Accra, for some photos capturing that “fly Ghana girl back home” vibe. Nana Osei Kwadwo chatted with her later on about An African City.

The first time I saw MaameYaa Boafo in Nicole Amarteifio’s An African City, I thought she was beautiful, fierce and versatile. She stars as one of five women characters, in the webisode, that returns to live in Accra after years of studying and working abroad. Debuting less than a couple months ago, the series has quickly gained a popular online following with major media shout-outs hailing via Ebony Magazine, BBC News, BET and NPR.

With comparisons being made to Sex in the City, the webisode is growing its audience by the day and captivating folks with African fashion, fly natural hairstyles and “awkward African girl” situations as the women support one another in acclimating to life in Ghana again. 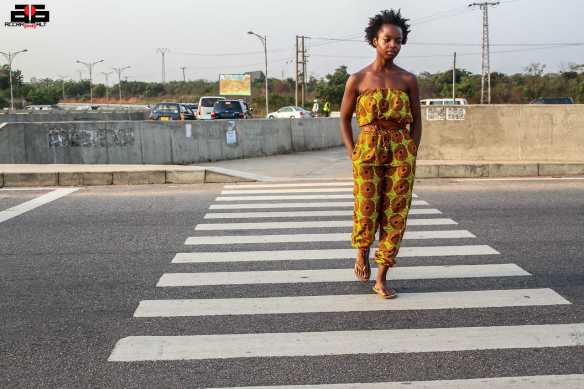 Taking a Royal walk on the highway.

MaameYaa has lived most of her life traveling around the globe but currently calls New York City home. She’s now working on a new project with renowned African American novelist and playwright, Walter Mosley, as well as a few new films.

Curious to know more about MaameYaa, I caught up with her recently to chat about acting, what it means to be Ghanaian, and her role in An African City. END_OF_DOCUMENT_TOKEN_TO_BE_REPLACED