El Anatsui via The Globe and Mail

Globally renowned Ghanaian-born contemporary artist, El Anatsui, has officially graced the Big Apple.  As of February 8, 2013, the Brooklyn Museum welcomed Anatsui’s first solo exhibition in New York City entitled, “Gravity and Grace: Monumental Works by El Anatsui.” Over 30 of his metal and wood works will be on display through August 4th of this year. 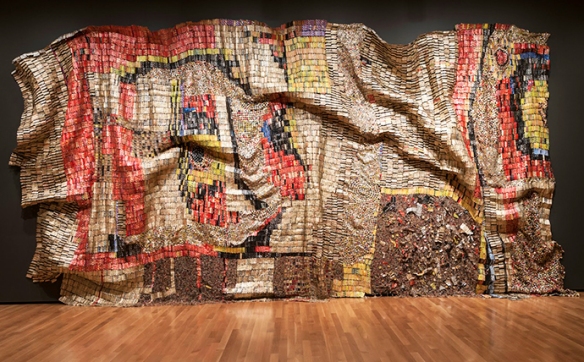 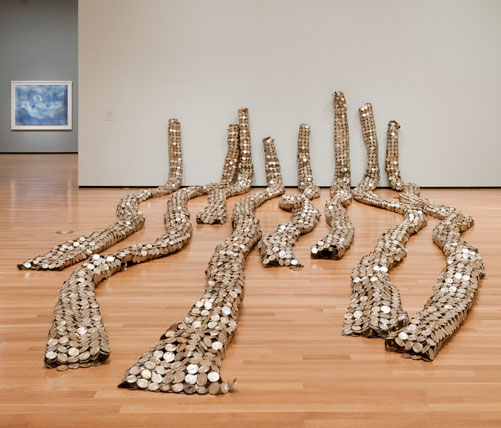 Golden Drainpipes via The Brooklyn Museum

Born in 1944 to a fisherman father who was also a master weaver of kente cloth, Anatsui grew up in the Anyako province of the Volta Region. He studied art at Kwame Nkrumah University of Science and Technology [KNUST] in Kumasi. However, the young artist did not forget his African roots—making efforts to immerse himself in local Ghanaian traditions. In the 1970s, Anatsui’s artistic style was entirely local – wall pieces made from wooden display trays gathered in local markets, stamped with mythical symbols using a hot iron. 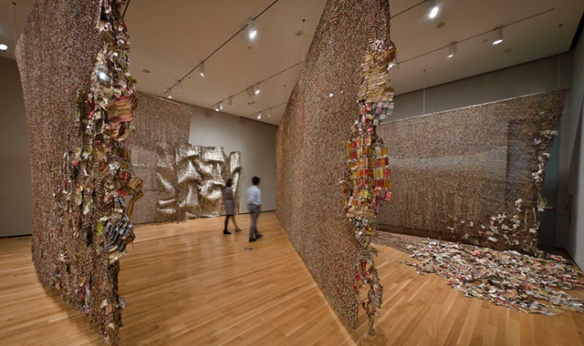 The Byzantine via Art Info

In 1975, Anatsui began teaching sculpture at the University of Nigeria in Nsukka. Here, Anatsui began sculpting from shattered pieces of traditional pots to reflect the political disillusionment across post-colonial Africa. Anatsui is no stranger to travel, absorbing a bit of creativity from all the places he visits. This experimental multicultural identity-making process continues to, quite literally, shape his present artwork.

Anatsui’s Africa via Time Out

He has exhibited at major institutions around the world including The Metropolitan Museum of Art, the British Museum, National Museum of African Art, Venice Biennale and Centre de Cultura Contemporània de Barcelona, among others. The sculptor made big news twice in May 2012 for the sale of a small work at a New York charity auction [for €580,000] and his New World Map art piece selling at Bonhams in London [for €678,000]. 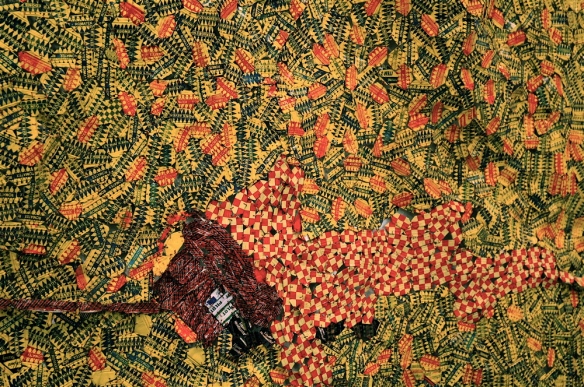 Anatsui’s Brooklyn Museum exhibition celebrates a unique art form that Anatsui himself invented back in 1998; an art process that begins with a hunt through his hometown in Nsukka to find twist-off liquor bottle tops manufactured by Nigerian distilleries, branded with names such as Bakassi, Chelsea, Dark Sailor, and Ebeano. These tops, found abundantly, are cultural goldmines—offering a peak into West Africa’s colonial past.

Other such materials include clay, wood and pieces of metal. These found materials are then wired together to form gorgeous, fabric-like sheets that tip the viewer’s perspective a bit. 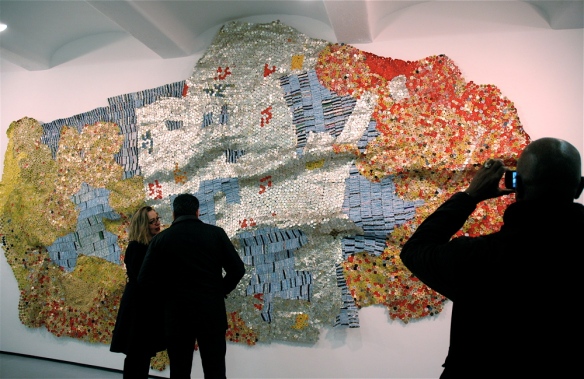 Pot of Wisdom via Paper and Threads

A couple of steps back, it looks like a sparkling, flawless piece of cloth, but a few steps forward, you blink to clear the eyes. There it is you’ll see the millions of pieces that make up Anatsui’s Africa.

*The images included in this post reflect the breadth of global art works created by El Anatsui, some of which are on exhibit as a part of the Brooklyn Museum installation.

4 thoughts on “EXHIBIT: El Anatsui’s Africa at the Brooklyn Museum”