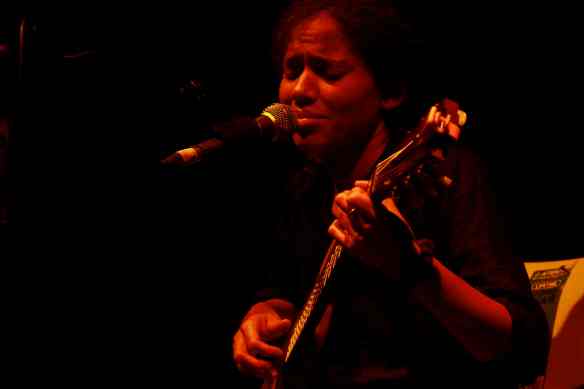 If you’ve ever seen Nneka perform, you’d remember. Like tell-your-grand kiddies-one-day type remember. Her presence just sticks with you.

You get the impression that she’s just being herself. Onstage and off. Dressed down, hair pulled back, comfortable in her own skin. When Nneka performs, she gets free. She strips herself bare to the bone for strangers in crowded rooms to see across the world.

This is what keeps us glued. This self-reflection society music and her unique ability to cull out the good, the bad and the DAMN-you-ugly! parts of our selves. Nneka’s sound bends soul, folk, AfroBeat, hip hop and reggae together into spaceships of human possibility. Her voice is an amplifying swirl of thunder and lightning – a blue shadow draped across the front door, the delicate cool taste of coconut water, the rake of the comb through tightly coiled hair – that strides out making you wanna run and hide. Nneka’s music makes you uncomfortable enough to confront your secret hiding places, dig out those dungeons of doom and reckon with your lingering ghosts.

The Nigerian-German singer/songwriter stuns crowds into silence on the regular. She’s rocked stages with music masters Nas, Femi Kuti, Ziggy + Damian Marley, among many others. Nneka’s currently on tour promoting her third studio album, Soul is Heavy (released March 2012). Also this March, she was selected by the African Women’s Development Fund (AWDF) to become the organization’s first Ambassador of the Arts. Last week, Nneka stopped by Accra to perform as a headliner at the High Vibes Festival.

ACCRA [dot] ALT caught up with Nneka at High Vibes’ Women in Music Workshop also featuring Ghanaian musicians Della Hayes, Ofie Kodjoe, Rita Ray and Lady Jay as they shared experiences in the industry. Nneka chilled and chatted with us about supernatural things – like the “warm wobbly” feeling she gets when she performs and mastering a spirit of individual creativity.

Read the FULL INTERVIEW below: 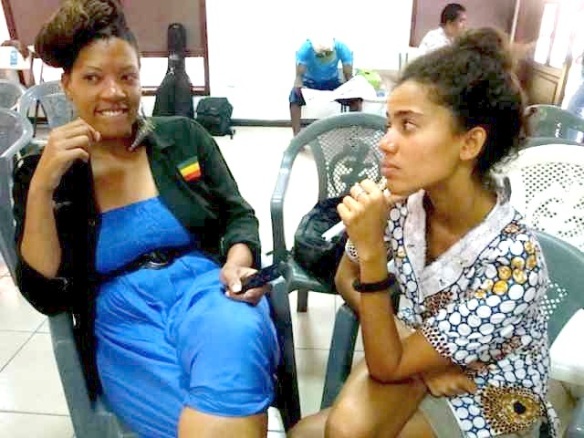 ADA: The first time I saw you live was in March [2012] for the AWDF event. Incredible to see because you give your whole self to the performance.  It seems like you’re here but also not here. What is that space like when you are performing?

Nneka: You are in sort of a sacred place. A place that is yours where nobody can just come and tamper or twist or pollute or contaminate. What I do is to block “the here.” The here can be good – it’s always good actually – but you have to know where the limit is. By creating that limit you are able to fetch creativity…or the strength to be able to do what you are doing and to be that open.

I have that similar feeling [in performance] when I paint. I don’t want anybody to see the painting until it’s done. I don’t talk about it. When I’ve started it, I don’t want to stop. I do not want to break – I want to finish it then and I want to capture the emotion that I have in that very place moment. It won’t be the same if I extend it into tomorrow.

ADA: Do you feel like it’s something that has to come out – that the creative process can’t be interrupted?

Nneka: Interruption could be good if you also allow yourself to be interrupted. I’m at a place in my life where I want to listen to other people more. I want to be more open to what other people have to say, other people’s artistry. You have to be able to allow other instruments into your space, you know? That’s another thing I’m learning.

ADA: Do you struggle with your craft?

Nneka: I don’t think too much about what I do. Most of it comes naturally. I’m very hard on myself sometimes but to a certain extent it’s good to be hard because then I always see my sin. And that inspires me also to be the voice that many people don’t want to hear – to be the conscious you don’t want to face.

I work on myself a lot and my relation to others. That’s a major concern. I try not to be too self-conscious. That’s another thing. Because that can also make you feel really small and too big [all at once].

ADA: Do you practice making music every day or do you work by inspiration?

Nneka: Playing more and being more consistent on my instrument – that’s where I am right now. To be more disciplined – not too much with the head – but I have to tell myself, “Don’t get stressed out if you can’t hold this chord. You can do it.”

To truly master your instrument, you have to practice. I try to practice every day now. A couple of months ago I would just go with the flow. I want to be better on the instrument, I want to be more confident. I want to feel that it is part of my body – an external thing that I approach once in a while. What I do is to give up thanks to the Higher Power. When people approach me – I know. I know that is exactly what’s going to happen. 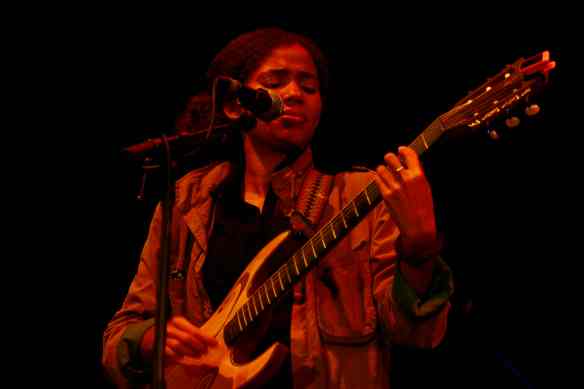 ADA: How do you know that you know?

Nneka: Because God is involved. It’s hard to explain. When I feel that warm wobbly thing in my system “chakra” – sometimes in my throat – I think I feel the pain of other people.

ADA: It comes to you as opposed to you pushing it out?

Nneka: Yes. I take from your grief – I take it in – and I give you love. You cry but it’s a good feeling. It’s not anything I do consciously. I don’t know what it is but it is that way. Yeah. 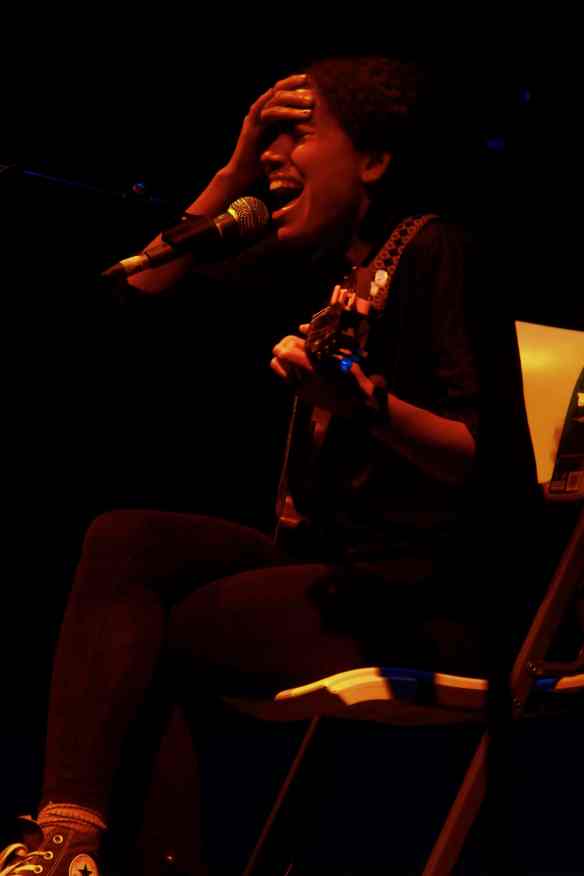 ADA: Say more about your foundation (ROPE) and your work with the African Women’s Development Fund (AWDF) as their first Ambassador of the Arts.

Nneka: The last workshop ROPE did [in Sierra Leone] these women were tailors. So we use what you know – we’ll make use of what you are familiar with – and try to take it to the next level. Most of these women just sew. BOOMP! They are given a design and they try to sew what they have been given. But they are not very creative on their own – like putting emotions into what they are creating.

These women are war-affected, sexually harassed, gang raped, some have had children at a very young age – atrocious conditions. I’m not a therapist but what we wanted to do was to find healing in expressing the pain on [clothing] apparel. We had a professional designer and a small seminar on how to create your own business – so that’s the educational aspect – how to be more independent. So we provided them with sewing machines and we watched their growth.

So the AWDF have been watching what I’ve been doing and there was also this one time I did this song [“Kangpe”] for the FIFA [2010 World Cup South Africa] video game and the money that they gave me for that – I gave it to AWDF. That’s how we connected. They wanted me to choose an African charity – at that time I was just building mine and I didn’t want it to be like I was putting my money in my own foundation so I looked for some organization I thought was doing quite well and they are very serious and transparent. I’m trying to have more time for things like that – motivating women and going into certain communities.

ADA: So, you’re about to get on the road again.

Nneka: Yes, we’ve been on the road for a while. Next up is Russia – Moscow, then St. Petersburg then Greece – then I’m doing acoustic [performances] in the States. I’m looking forward to having a break after two years nonstop on tour. You have one day off but that’s usually a travel day. So it’s quite tough. 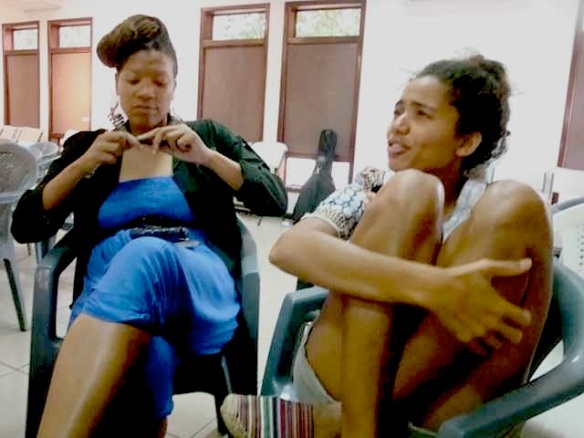 ADA: Touring isn’t as glamorous as it seems.

Nneka: Many Nigerian artists think you earn your money just by playing half an hour – you get your five million and that’s it. Abroad, it’s a whole different story. You have to work – you are almost enslaved to a certain degree, yeah? Almost like cattle they stamp and put you in. Sometimes it’s hard. It’s not just enjoyment. They don’t do me first class. Normally – even in the back sef next to toilet – 2Face will be in front! Me, I’ll be in the Economy Class and my fans – “Oh, hi Nneka! Can I sit down with you and have a drink?” – It’s all good! I like it actually. But sometimes – 10 hour flight, you want to stretch your legs and sleep properly.

But when I do festival tours, I have the opportunity to go and see other people perform live. That’s great! I saw De La Soul the other day and Fatoumata Diawara – She’s amazing, I love her. And she has a wonderful spirit. You need the warmth from human being to human being.

Stay UP with Nneka | @nnekaworld

1 thought on “NNEKA and the WARM WOBBLY”