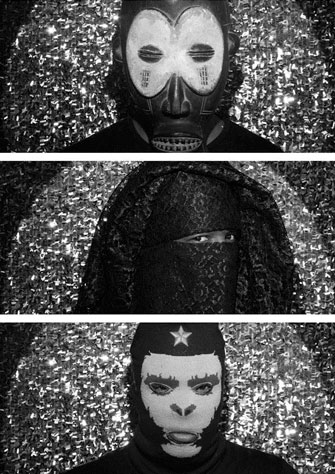 We’re really blown away by this. If you don’t believe in magic after watching these three previews, go see your doctor. Wish we could teleport to the Brooklyn Museum to peep the cinematic action.

If you are in the NYC area on next Thursday, May 24th check out The Triptych. It’s a three-part short documentary film series presented by Afro-Punk Pictures and the Weeksville Heritage Center. The films chronicle the artistic process of three Black visual artists: Kenyan-born Wangechi Mutu, Sanford Biggers and Barron Claiborne (co-creator of the series).

As Afro-Punk puts it, “The first in the series features [three] contemporaries, luminaries and friends. Spanning the artistic gamut from interdisciplinary to photography and performance, their keen reflections on the world are at once startling and insightful.”

Shout out to the homies Terence Nance (Director) and Shawn Peters (Director of Photography) of the film series. Nance and Peters collaborated with Blitz the Ambassador on the Native Sun (2011) film, as well as many of his other music video and film projects. Nance is also directing the documentary on Blitz’s 2011 Homecoming concert in Accra with Les Nubians (co-produced with REDD Kat Pictures). 2012 is a hell of a year for Nance whose debut film An Oversimplification of Her Beauty received rave reviews at Sundance.

For more information, check out www.afropunk.com.